This report (scroll to download) is a first step towards mapping the climate conversation in Europe. The aim is to get  a better sense of the various communities and groups that will support the European Green Deal (EGD), as well as understand the types of dissent and counter-mobilisation that will inevitably arise and risk derailing the implementation of the EGD’s main policy objectives.

We were prompted to initiate this investigation against the backdrop of somewhat complacent assumptions (comforted by a number of surveys) about a large consensus across European publics regarding the climate emergency and the need to address it – especially in the aftermath of the first wave of Covid, which seems to have triggered an increased awareness of the climate emergency and fuel a desire to ‘build back better’. Our concern was that climate policy might instead become the latest populist rallying cry (potentially replacing immigration and migration as a wedge issue).

Find out more about our methods here.

Why a social media analysis and not a survey?

To evaluate the mobilisation potential of detractors we decided to track the online conversation around the EGD, and more broadly around climate policy in eight European countries. Our findings should give policy-makers pause for thought:

Read more in the full report below. 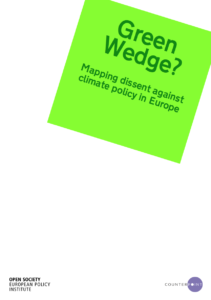 From the project
Bridges