Europe’s populists will try to exploit coronavirus. We can stop them.

Italy’s Salvini and others on the far right could weaponise people’s despair. Democratic governments must fight them with transparency 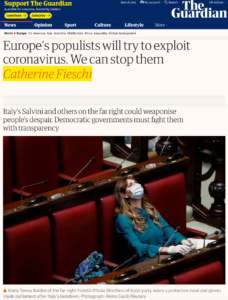 If the coronavirus pandemic is fuelling any political hope, it is that this crisis is a robust nail in the coffin of populist politics. Surely, some argue, in the face of an entirely indiscriminate, unforeseen and formidable plague, for which no one can be blamed (unlike, say, greedy bankers and unscrupulous lenders in the global financial crisis, or the terrorists of 9/11) people will turn to the truth, to science and to expert-led government.

And, true, populist leaders seem to have lost their voice, for now: the attempts to blame migrants, porous borders and the forces of globalisation for the coronavirus have received short shrift. Fear and deference have, momentarily at least, rendered citizens less inclined to question mainstream governments and turn to populism’s snake oil vendors. Better still: it looks as though governments led by populists or populists-lite, such as Donald Trump and Boris Johnson, are set for a rough ride, too, unless they change their ways.

No one expected many Chinese citizens to question their government’s robust coronavirus response, but Italian attitudes, so far, add to the sense of populism’s – probably greatly exaggerated – demise. If Italy can be counted on to listen to the orders of a government that only a few weeks ago was viewed as accidental and temporary, perhaps the tide has turned on the populist Lega party leader Matteo Salvini.

And, if it has turned on Salvini, why should it not have turned on all populists? True, there is something quite remarkable about Italy’s forbearance in the face of this shock. But a couple of caveats. First, whereas these certainly are extraordinary times, Italy has always been resilient to shocks. Terrorism, migration, corruption, the financial crisis and regular, devastating earthquakes have not brought it to its knees. Indeed, the earthquakes have a lot to do with the manner in which health, police, army and emergency services are reacting now, and why Italy does a fine line in civil contingency, and its citizens an even finer line in social solidarity.

Powerful cities; strong regions; an excellent – if decentralised – healthcare system; hi-tech industry; a web of resilient firms and civil society organisations; its own, local food production, creativity and expertise in spades (including in the highest echelons of its civil service), all despite significant regional variations, account for its capacity to respond to crises. These qualities are in evidence today – as always. But they have not been enough in the past to ward off populism, a force that can be reignited at a stroke in tumultuous times. Think already of the reaction, including on the Italian far right, to remarks made by Christine Lagarde, the president of the European Central Bank, that suggested that Italy would have to cope alone.

Another caveat: it is early days – for every nation. I, too, want to believe that there will be a significant turn against populist politics, but I have worries. The first is that much depends on whether the draconian measures taken in Italy, France and Spain, and elsewhere in Europe, are seen to make a big difference. Even if the various closures and lockdowns are effective at containing the spread of the virus, it will be very difficult to assert counterfactuals: “it could have been so much worse” never quite cuts it, because it sounds too politically convenient.

My second worry is what if this is only wave one of a number of coronavirus epidemics? If the virus mutates, if it is seasonal, if the different timelines of different countries create different waves of contagion and crisis, then governments will have to admit that different measures might have been needed and that we are all still learning. Such incrementalism and humility will be a difficult political message to manage. And over time will governments actually find themselves confronting populations that are grief stricken and economically poorer (that is inevitable) but also frustrated and angry – ready to acquiesce to, or even demand, more authoritarianism?

Salvini’s Lega may be haemorrhaging support, but that support is flowing mainly to the party to the (far) right of them, the Brothers of Italy. The point is that crises such as this don’t necessarily show populist politics up for the fraud it is. They can also have reverse results. Genuine scientific disagreements can be weaponised as conspiracy theories; legitimate hesitation dressed up as incompetence; and failures used to justify increasingly authoritarian measures and positions. Could the severity of the Covid-19 crisis serve as justification for the postponement or annulment of a major national election? Unlikely still, but not unthinkable.

The assumption we tend to make is that if this shock encourages people to turn away from populism, it will mark a return to governments of the late 20th century. But this is to fundamentally misunderstand the path that we have all been on for the past few decades.

And this is the third, and most important, worry: we continue to think we can “go back” but those waters have closed behind us. We need to move into something new that associates expertise, knowledge and information. A combination of digital technology and populist politics has led us to an era of what I call populocracy. And while we need urgently to reassert truth, science and reason, how we source this expertise and ensure legitimacy for it will be a fundamental challenge.

What will eventually rid us of populism in our time of cholera is the capacity of pluralists and true democrats to win back trust in objective facts and expertise in ways that make sense to the public. This will be in part measured by the success of the measures taken against the pandemic, of course. But, in a crisis that promises to initially overwhelm our systems, and record nothing but loss of life and defeat, success will also be about demonstrating that whatever was done, was done with people’s needs in mind, especially those of the least well off and the most vulnerable.

Governments must also demonstrate that they can use digital technology and its promise of shared information and expertise for the greater good and with the greatest flexibility. This is the time to become truly open and resist hunkering down on communications.

Unless governments realise the need to be transparent about decision-making, unless they open up to consensus-building and consent, the crisis we are in will overtake them. Populist accusations of incompetence, opacity and manipulation will ring true for some again. They are bound to, because many will suffer great losses.

In this respect, the coronavirus crisis is a test of progressive politics — a test of solidarity, but also a test of transparency. It is an opportunity to show that a new diffused technocracy can be to the benefit of the greater good. It is an opportunity to show that to grow trust in government you trust the citizen. This is what will rescue us from the coronavirus, and the virus of populism.