Populism and the sad revolution of ordinariness

We’ve said this before – and we’ll say it again: the rise of populist politics are predicated on the long, slow death of expertise as we knew it and valued it.

The debate on the EU (here in the UK and in the rest of Europe) is a perfect reflection of this perfect storm: the accusation of incompetence levelled at European policy-makers and politicians, the disdain in which they are held as ‘technocrats’, is matched only by the accusations of elitism when they claim – or display – a level of knowledge and expertise. Damned if you know. Damned if you don’t.

This, in case you were wondering, goes for all experts: national level expertise or technocracy doesn’t fare any better. As Michael Gove pronounced on Sky “people are sick of experts”. And if you’re an expert, you are perceived, as one person said last night on BBC Newsnight, as “part of the establishment”. Damned not once, but twice. So, as the twitter storm illustrates, it would seem that knowing anything (about anything), lands you on the side of those who will be shot come the sad revolution of ordinariness.

Trump’s meteoric rise despite the hair, the colour, the nastiness and the obvious incompetence in any domain that might be relevant to the American presidency (not necessarily in that order) is testimony to the power of this thinking. As is the rise of assorted populist figures on the European continent. And as far afield as the Philippines.

Populism has many triggers: fear of rapid change, the perception of losing one’s status as a result of growing inequality, but also as a result of job redundancy (literally and metaphorically—no job, but also no job to be done), of market change, or of cultural and social change. The main trigger seems to be the frustration associated with a world that seems to hand you the means of information, access and transformation, while ceaselessly hammering that ‘There Is No Alternative’.

That layering of promise and frustration in a context of ‘information’ supply is the fertile soil into which populism flourishes.

Speed of communication, access to information, open source code and social networking have not only given rise to social activism, citizen journalism, whistle-blowing on a grand scale and cool geeks devising games and encyclopaedias in their garden sheds.  They have also created a planetary culture in which the availability of information and its lightning-fast circulation have overtaken traditional gatekeepers (good and bad) and quality control (legitimate and illegitimate).

As current debates illustrate, this is about the wholesale questioning of the notion of expert knowledge at a time of mass access, mass anxiety and mass disappointment.  Whether the levels of anxiety and disappointment are worse or better, equal to or slightly different from those of the past, actually makes no difference to the argument: it’s the capacity to share it on this scale, to selected but segmented audiences trapped in the self-reinforcing echo-chambers of belief that really matters. The surrogate to expertise is the mass belief that can be generated in lightning quick times. (The recent short, sharp prominence granted to the views of an unknown literature student with a big mouth is a case in point). Coupled with demands for immediate impact and results.

As such it’s not one century’s worth of habits, values and institutions we’re going back on, but at least three. Expertise has been the basis for post-Enlightenment institutions across much of the Western world; a model which we have encouraged others to emulate. And, regardless of how close or how far we remained from this ideal, it served as the foundation of an established social, political, commercial and scientific order that sought to conquer the world.

So, whether the current attacks on expertise might be about the emergence of a new type of expert, and an entirely new category of knowledge. But, what seems clear is that the notion of expertise as we know it, and as it has served us, is on its way out. Not only because of its growing – and pretty obvious – inadequacies, but also because of the spectacle (and public use) we can make of these through digital communications.

That’s not to say that quality is not out there—just that it is out there with a lot of rubbish.  And as one political science professor told me as an undergraduate years ago in these exact terms: don’t ever forget, shit floats.

The downgrading of expertise as a fundamental regulator of power is neither inherently positive nor inherently negative.  It just is. However, in the immediate context it is having one major and hugely destabilising political and social consequence: the growth of populist politics and, more broadly, the populist rationale.

Populist politics are often associated with the rise of figures such as Donald Trump, or Marine Le Pen, and, for sure, these figures are both symptoms and fuel to populist mobilisation. But such politics also have profound consequences that go well beyond the rise of unsavoury parties—consequences that infect the political landscape in much more profound terms.

The first is that they create a generalised self-righteousness, a permanent ‘says who?’ scowl that easily moves from cynicism, to conspiracy, to xenophobia and, in fine, to a much more radical and noxious attitude toward, not only the well-known targets (“outsiders” of every kind who are seen to benefit from the current order more than “natives”), but also toward all institutions.  And these institutions are indeed in need of reform, they have to change, they are inadequate, in some cases utterly broken—no doubt about it.  But their re-invention needs to come from the creative powers of the digital revolution, not its populist potential.

The second consequence is that in light of such generalised public attitudes political waters have become so treacherous, that politicians of every kind are tempted to give into demands for immediacy an what we’ve called elsewhere, coliseum politics. The temptation to retreat from the quagmire, and let citizens duke it out in crude referenda, seems almost irresistible. Indeed even political contests that are not labelled referenda, become infected with the thumbs up/thumbs down logic, the crude lines, and the appeal to common sense.

In this sense, the populist process is a vicious, self-fulfilling prophecy that wrecks the bargain between us and any institution we attempt to create or re-create, by shattering our belief in the skill of those who created it. It is a never-ending game of undermining our own successes, because rather than creating admiration, success breeds suspicion and cynicism. After all, if you’re good at this, you must be part of the establishment.

Allowing ourselves to be led by the populist process is an enormous threat to our prosperity, because it is a threat to what we do best: think creatively in collective endeavours.   So giving in to populism, is giving in to the risk of counter-revolutionary rather than revolutionary thinking.  It is the risk of reviving old paradigms, old habits (of corruption, cronyism, of ‘bureaucratism’, of exclusion) and letting the wrong kind of institutionalism hold sway, when in fact what we need is to support those new fledgling forms that can help us transition forward.

The current state of European politics, at every level, illustrates that we are letting this happen. In this country, in the UK, we are in the midst of a referendum debate that has reinforced citizens’ mistrust of all politicians and elites and has – instead of allowing them to examine the complex promise of the Europe of which they are currently a part – elicited crude lines and even cruder arguments on both sides.   Because that’s what that kind of thumbs up/thumbs down politics will do. And businesses have colluded with politics on this and have not sought to carve out a role for themselves as part of the leadership of a renewed Europe. There goes a missed opportunity, post-2008, to make a long-awaited contribution.

The challenge is to re-create forms of education, employment and welfare that lock onto where the 21stcentury citizen lives, socially and politically.  This is new territory, and instead of exploring it, we are retreating into the last crumbling nooks of the old temple. It’s time to come out an build the new ones; to realise the potential of digital by allowing ourselves to think about how this profoundly changes, not just how we see the world but, how and where we see ourselves. What jobs we do, what having a job means, what place work and play can have in lives where we’ve achieved what we had set out to achieve: to have more time to think and play. We got what we wished for; let’s not squander it. 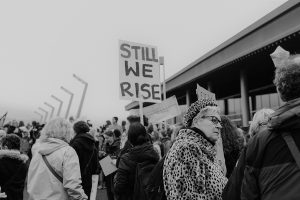