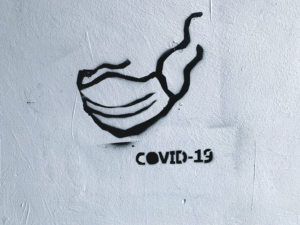 No doubt there is a difference between gliding through the Palazzo Pisani Moretta in Venice and donning one’s blue surgical mask for a spin on the Northern Line. But there is also an irony in the fact that a symbol of carnival, irreverence and mischief should have its fate so upended as to become – for the perennially suspicious and those breezily dismissive of the virus – a symbol of manipulation by the ‘deep state’ and of capitulation by the weak-willed.

The widespread unease provoked by recommendations to wear masks serves as a useful lens through which to examine the varieties of mistrust that plague our polities. Some argue that they find them uncomfortable; others are sceptical about their efficacy. Others still view them as instruments of government oppression.

Masks are as much about expression as they are about dissimulation. In Venice and in Rio the meaning of carnival embodies that Rabelaisian ideal. It is about the power of laughter, of the absurd, to suspend convention and disrupt the social order. At Halloween, it is about the conjuring and exorcism of evil spirits by channelling them.

In western societies, as the Enlightenment values of sincerity and transparency became the lifeblood of new democracies, masks became anathema to modernity. The mask as protection – mainly remembered for its public use in Spanish flu pandemic of 1918-20, and then understood in sanitized hospital settings – takes us back to this messy and contradictory history.

Even within liberal democracies there are striking differences. In the United States, it is clear that the anti-mask wearing movement segments neatly along partisan lines: 63 per cent of Democrats, but only 29 per cent of Republicans, agree that masks should be worn. For those who disagree, it is mainly because the mask is perceived as government manipulation. This is about non-compliance with the ‘deep state’. The mask has become a weapon – and a hostage – in the so-called culture wars.

In Britain, the numbers of anti-maskers have soared since July – with slogans that mix dubious health messages with a hefty dose of ‘new world order’ conspiracies, including tenuous connections between masks, tracking and 5G.

If we look at France, the picture is slightly different. Anti-maskers congregate mainly virtually – as opposed to American-style ‘Freedom Rallies’. But there is also a mix of profiles on the various French anti-mask Facebook pages. Conspiracy theorists abound, but so do educated libertarians.

In Germany the anti-mask movement Querdenken 711, launched in Stuttgart in April, has been stronger than anticipated. It was initially non-partisan and described by its leaders as ‘a refusal to conform to diktat’ but it was soon infiltrated by the far-right and has gradually become linked to groups who argue that the coronavirus is a hoax.

The mask has become a different kind of symbol. No matter where we look across western liberal democracies, individuals in anti-mask groups all display record levels of mistrust in institutions – and in experts. The lack of consensus on masks across medical experts and the slow about-face of the World Health Organization fuelled the populist anti-elite refrain by allowing for the exploitation of the genuine scientific lack of certainty that is the hallmark of scientific learning.

Reactions to the mask injunction have varied across the world, but tend to map on to a distinction between societies with high levels of acceptable individualism versus those with a more pronounced ethos of collective responsibility.

The United States v Japan for example – or more broadly the West v the East. Asian societies took to wearing masks decades ago. In Japan masks never really went out of fashion since the Spanish flu, sustained by Japan’s penchant for social propriety. Masks were being routinely worn all year round.

Other Asian societies – China, South Korea, Thailand – followed suit for reasons of contagion, but also of pollution. Long before Covid, most westerners took a rather dim view of Asian travellers in their surgical masks. The mask was often seen as a slightly paranoid over-reaction, or interpreted as a rejection of the casual interaction that – we imagine – characterizes western civil society.

In these pandemic times, the connection between an Asian convention and the origins of the virus plays a role. The mask’s connection to Asia digs deep into our stereotypes of what ‘makes the West the West’, whether real or imagined – individualism, debate, but also spontaneity and casualness; and what we associate with an eastern conception of the self – more collectivist, reserved and conformist. And so, masks continue to fulfil their eternal function and force us to ask: Who are you? Who are we?