Populism in Germany: a history of its mentalities, myths and symbols

In Populismus in Deutschland: Eine Geschichte seiner Mentalitäten, Mythen und Symbole, Herfried Münkler discusses German populism after reunification, deeply influenced by European issues and still constrained by the humiliation associated to the end of the Weimar Republic and the rise of the Nazi party. Münkler traces populism in Germany back to the 15th and 16th centuries—a time when the birth of a collective German identity influenced the populist discourse; the author then traces the development of populism and the myths, narratives and symbols that marked it over time, in particular during both world wars.

The essay is in German. Its English version is included in the volume Populist Fantasies: European revolts in context. 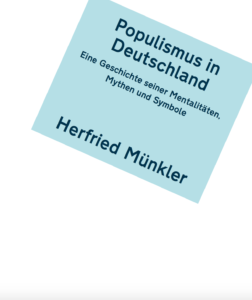