Barely twenty years ago, Finland was an introverted nation best known for being the Soviet Union’s neighbour; foreign policy was the job of the political elite, and any difficult issues in politics and beyond were always dealt with in silence. Nowadays, people hold on-line discussions about political issues – national and European. And are quick to blame the elites for any mistakes.

Ten years ago, Finns generally thought that there was no racism in their country. Nowadays, the public debate on the matter is brutal; freedom of speech is seen by many as the expression of views that are critical of immigration.

As recently as five years ago, the policy playing field was dominated by the same old parties. But today they share the stage with the populist True Finns, who won one fifth of the vote at the last parliamentary election.

What has happened in Finland? In this pamphlet, Finnish journalist Johanna Korhonen outlines the cultural changes that resulted in Finland leaving its traditional silence behind to become a playing field for loud populism.

Finland’s political elites and media spent the last twenty years discussing mainly talent and international competitiveness, while overlooking most of the traditional values and day to day concerns of ordinary people for whom the pace of change has been too hard to cope with. As a result, these people now represent the bulk of the populist voters. 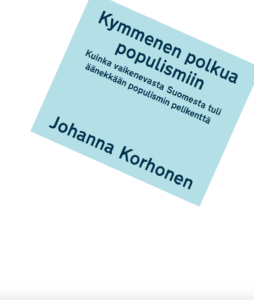 This pamphlet is in Finnish. Its English version is included in the volume Populist Fantasies: European revolts in context.