Conspiracy Theories in Europe: A Compilation

Pamphlet, Counterpoint / Political Capital /  the Center for Research on Prejudice / the Institute for Public Affairs / the Zachor Foundation

Two and a half years ago, Political Capital, Counterpoint, the Center for Research on Prejudice, the Institute for Public Affairs, and the Zachor Foundation embarked on a project to develop an effective response to conspiracy theories in Europe. The aim of the project was both to build a stronger understanding of conspiracy theories and rival political narratives – particularly those with a xenophobic or anti-Semitic foundation – and to explore through workshops and interventions how those conspiracy theories that pose a danger to democratic values can be dealt with and, if necessary, short-circuited.

In particular, we wanted to achieve three things we believed were in urgent need of attention. First, we wanted to develop a robust evidence base on which to build a textured analysis of the roots of conspiracist beliefs. We were concerned that too much contemporary analysis of the phenomenon was divorced from thorough empirical work. We hoped to address this with detailed survey analysis of people’s conspiracist beliefs, shining a light on both the extent of these beliefs and their roots. Second, we wanted our analysis to be comparative – drawing links and noting differences between the appeal of conspiracy theories in Western and Central and Eastern Europe. As a result, the project was designed to be a truly collaborative effort, learning from each other’s expertise to find national strategies that were both appropriate to cultural context and adapted from successes (and mistakes) elsewhere. Our focus countries were France, Hungary, Slovakia, Poland and Norway. Third, it was essential that our research was sensitive to cultural differences, because an approach to conspiracy theories that took into account contextual nuances would always be superior to a “one size fits all” strategy.

This compilation brings together some of the written highlights from our project. It will hopefully illustrate the steps we have made towards these three aims: from the detailed evidence-based studies of conspiracy theories in France (Chapter 3), Slovakia (Chapter 4) and Poland (Chapter 5) to the subtle contextual approach in our pieces on Hungary (Chapter 2) and Norway (Chapter 6) and our comparative analysis of the “conspiratorial mindset” in all five countries in our study (Chapter 1). We have tried to select the pieces from our project that depict the sheer scope of the research conducted. Although not all of our work can be included in this paper, more information can be found on the project website (Deconspirator.com), where we have a range of articles, interactive maps and write-ups of the project’s events and workshops. 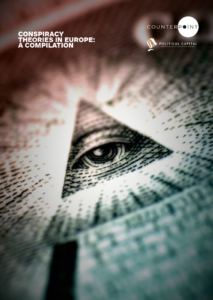 In partnership with
Political Capital