From Matteo Salvini to Boris Johnson, populist politicians brazenly distort the truth. Don’t think they do it to be believed 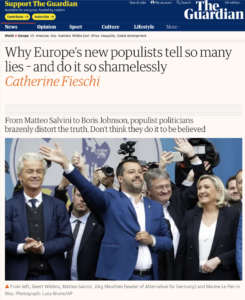 The torrent of lies that flows from the mouths of populists feels relentless: from Donald Trump’s routine lying about everything from Iran to the weather, to Boris Johnson’s fictitious £350m for the NHS, Turkey on the cusp of joining the EU or most sensationally misleading the Queen about why the UK parliament should be shut down.

My research on populism elsewhere in Europe confirms that lying is a constant feature of populist politics. In France, Marine Le Pen lies about how her party spends public money and her (fake) Twitter accounts. Viktor Orbán, the Hungarian prime minister, lies gigantically and systematically about the migration to his country. As for Italy’s Matteo Salvini – from migration to sanctions against Russia – as the song goes, if his lips are moving, he’s lying.

The defiant line, found nestling in most populist party manifestos, used to be: “We’re only saying what everyone is thinking.” Which for the far right is a coded way of saying: we don’t like immigrants, we don’t like people who look different, dress differently, speak differently. The aim is to draw a sharp line between the supposed common-sense instincts of ordinary people and the highfalutin ways of the elites. But as the reach of their ambitions and grasp on mainstream politics and power has extended, populists have escalated to routine, outright lying. To be clear, this is not about the far right or the far left, but rather that as populists, these politicians resort to shameless lying.

Many of the lies are shocking because the statements are so verifiably, obviously false: the crowds aren’t there, the numbers were entirely made up, and the declarations – so furiously denied – are on the public record. The blatant dishonesty leaves us speechless.

Politicians have, of course, always dissembled, but the traditional political lie was designed to cover up an unpalatable fact. No one wanted to be caught lying. If accused, they had to explain (“I didn’t inhale”, “I am not a crook”, “not … with that woman”, the dossier wasn’t “sexed-up”) and they might then fall from grace, face a public inquiry, or indulge in that staple of political redemption exercises, the televised apology.

Populist lying, by contrast, is designed to be seen – it is the opposite of a cover-up. In the populist playbook, lying itself is glorified; it is an instrument of subversion, its purpose to demonstrate that the liar will stop at nothing to “serve the people”. The lies are signals that these politicians are not bound by the usual norms of the liberal democratic elite. Liberals have virtue signalling – populists have outrage signalling. This is the politics of appealing to the gut over the brain.

Above all, though, the lies are about taking one of representative democracy’s creeds – authenticity – and turning it on its head. The idea of authenticity is at the heart of the populist worldview, yet it is rarely studied as a political concept. In liberal democracies the notion that politicians will uphold basic values of honesty has long been a given. It means delivering on what you promise and doing as you said you would – or paying an electoral price if you fail. With ever closer media scrutiny and the growing reach of social media, an even deeper correlation between the private and public self has been demanded of politicians. They have to be true to themselves, not just true to their word.

Populists have been quick to turn the value placed on authenticity to their advantage. Not by striving to be truthful, but by demonstrating that they are authentic (or instinctively connected to the experience of “the people”, who are authentic) to the point of not caring about being shown to be liars – as long as the lies are told “in the interest of the people”. They tend to either sweep away the evidence that they lied with great nonchalance (well, I might have said that, but so what?), or flaunt the lie to show their chutzpah, their willingness to game the system – and to highlight the supposed hypocrisy or stupidity of whoever is being deceived.

The higher the stakes, the bigger the lies: as populists get closer to power, rules start to bite and institutions reassert themselves, and so grand gestural, destructive lying takes over. If you can’t join them, smash them. Whether it’s misleading the Queen, or, as with Salvini, delivering video commentary straight into people’s social media feeds to create an alternative version of reality.

Are there diminishing returns to all this lying? Two factors are at play. One is whether there is a limit to the lies that voters will tolerate – and the jury is still out. Polls have not registered a decline in the support base for either Johnson or Salvini. Support for the far-right Austrian Freedom party (FPO) slipped by a third in the weekend’s general election as voters apparently punished leader Heinz-Christian Strache for a corruption scandal that brought down the coalition government. The result might plausibly suggest though that the FPO paid a price for behaving like old-fashioned politicians, rather than modern populists. Had Strache adopted a more shameless Berlusconi/Johnson style, the FPO might well have done better. After all, the point is to own the bad behaviour.

True, Salvini has been dislodged from government in Italy for now, but that may have been because he over-reached tactically. And if Johnson suffers from the supreme court’s verdict on his shutting down of parliament, it is because he underestimated the resilience of parliament and the judiciary.

Limiting the advantage populists can gain from their bombast may ultimately have more to do with the skill of mainstream politicians and institutions. The EU’s new approach to the rules of migration management, for example, may help roll back Europe’s populist moment. Even if voters are not bothered by the lying, populist parties may simply find themselves outmanoeuvred.

A second issue is political culture. All populists have lying in their DNA, but they do not exist in cultural circumstances of their own making. In a culture where directness (or bluntness) and trust are highly valued, such as the Netherlands, breaking taboos around multiculturalism and political correctness is a perversely effective way to claim authenticity. Geert Wilders, with his talk of taxing hijabs and vitriolic statements about Islam, was a master of the outlandish statement twinned with a claim to authentic Dutchness.

In high-trust political cultures where transparency is a vital ingredient of political life – the Nordic countries, for instance (Swedish politicians as a matter of course share details of their tax returns) – matters are even more interesting. On the one hand lying is more taboo than elsewhere. But the simple act of accusing mainstream parties of lying, the merest suggestion that elites are being inauthentic – as the populist parties have done in Denmark and Sweden – can attract voters looking for the frisson of breaking with the norms of mainstream politics. Germany offers a variation of this: a political culture where the spectre of racial and ethnic exclusion is such that the far-right AfD can gain a disruptively “authentic” appeal simply by using a few choice expressions and references that evoke Germany’s darkest days.

By contrast, in political cultures where mistrust and cynicism run high, such as Italy, the currency of politics is already disbelief, so the worst mistake Salvini could have made was to start believing his own hype. The minute he called for new elections and moved against his coalition partners in a grab for power, he overplayed his hand. There may be little electoral cost to lying (think of Silvio Berlusconi) but there is a high price to be paid for drinking your own Kool-Aid.

In the UK, where irony is the currency of choice, populism is perhaps at its most dangerous because no one takes it seriously until it’s too late. It occurred to few on the pluralist side of politics that Nigel Farage and Johnson actually meant to do what they said. That they were, in other words, not being ironic. For all the sophistication of the British polity, few people took their authenticity as seriously as they ought to have. Until now.

We need to stop asking why voters believe populists’ untruths and why they let themselves be repeatedly swindled by them – because they don’t and they aren’t. The purpose of populist lying is not to be believed. Only very belatedly do we seem to be grasping that the politics of lying and shameless behaviour are powerful elements in populism’s corrosive ideology.