I pointed out that 1967, the year of my birth, isn’t exactly the Middle Ages, and that professional fulfilment and choice had been equally high on my, apparently pre-prehistoric, agenda.

As I walked home, my irritation gave way to curiosity. I felt that I shared more with her than she knew. And yet I was simultaneously acutely aware of our differences. What is it about millennials − born roughly between 1981 and 1996 − that elicits this vague mix of recognition and puzzlement?

Critics argue that the concept of millennials is a construct. And, of course, it is. That’s what social science does. It creates constructs through which we explain the world. The question is whether such constructs are useful. Working with generations, rather than age cohorts, helps us understand whether the behaviour or attitudes we see at a given time are dictated by age, or whether they are specifically carried by a group − regardless of how old they are. For example, are these people more liberal because they are young, or will they always be more liberal, even when they are much older, because of what they lived through in early life?

In advanced liberal democracies millennials share a set of attributes that seem to be foundational to their outlook and behaviour. Born at the earliest at the very tail-end of the Cold War, they came of age at the time of the 9/11 attacks, and most of them hit the job market just as the great recession hit. They are computer natives, but not digital natives. They are, in fact, a strange mix of new forms of vulnerability and freedom, connections and disconnections. They are the cautious children of a carefree generation.

In much of Western Europe millennials are discussed in predominantly economic terms. In France, with its perennial struggle with unemployment, millennials create disbelief at the way they discard permanent positions and shun long-term career prospects − often having been at the forefront of demonstrations against ‘precarious work conditions’.

In Britain, critics point out the discrepancy between their demands for housing on the one hand and their apparently cavalier attitude to work practices and traditional corporate expectations.

They say they want access to housing but refuse the discipline that goes with this sort of purchase. In Italy, they are being blamed for the political stalemate they have imposed on the peninsula through their massive rejection of mainstream parties.

In the United States, their demographic weight leads to an emphasis on their values and their political impact on an increasingly polarized nation: millennials are not only the largest generation, they are also the most diverse as their ranks have been swelled by young immigrants. This means that their views on diversity are markedly more liberal than even the progressive GenXers, born between the mid-60s and the early 80s, and Baby Boomers, with birth dates between mid-1940s and 1964.

Everywhere though, they are both heroes, who innovate and renew, and sacrificial lambs, who will bear the brunt of the recession’s legacy.

Millennials are held to be everything and its opposite: exasperating and promising in equal measure; health conscious while breaking obesity records; far more educated than previous generations yet tempted to produce and consume appalling media content.

This is perhaps the most important point. Millennials are the living, breathing result of the contrasted, unequal world that previous generations have constructed. The variance we find inside this generation doesn’t invalidate the notion of millennials, it points to one of its intrinsic characteristics: schism.

But looking at it through the lens of the needs of the societies they will inherit, what we see is their extraordinary mix of skills. Are their contradictions not testimony to the potential they possess? What appears as inconsistency, is also the flexibility that underpins resilience; what may come across as self-regard is also the ethics necessary to navigate a world full of hidden exploitation.

Their quickness to take offence is also a form of intolerance of intolerance. A sign that, for all their ‘plasticity’, they are not push-overs. Calling some of this cohort’s younger members ‘snowflakes’ is entirely missing the point. 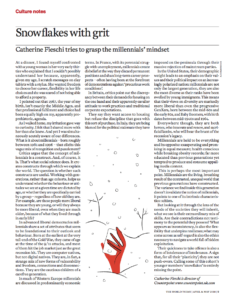 This article by Catherine Fieschi first appeared in The World Today, Chatham House, April & May 2018