Public monuments seem to have become the lightning rod of our cultural wars: from Robert E Lee, to Cecil Rhodes, to intimations that Nelson might fall, the past few years constitute a high-water mark for the contestation of collective memory. How do we commemorate the past when the past keeps on changing?

For some this is a bit baffling − the past is the past, why tear down its artefacts? Even those we find abhorrent can stand as a lesson learnt. For others, prevarication seems at best nonsensical, at worst, a living insult. Russia and adjoining countries made a clean break of it post-1990 (sometimes even earlier, Prague’s Stalin monument was destroyed in 1962) and tore down the symbols of a failed and cruel political experiment. Why can’t others do the same?

This debate highlights how difficult it is to agree on the status of a collective memory and a shared definition of national identity.

Statues and memorials are above all exhortations to remember. But there are different subtexts. Though all of them seem to scream ‘never forget’, we could distinguish between memorialization − that often reveals a shameful period of history to stand as a warning − and sacralization, that demands less understanding and more mythification. If anything, the latter is about ironing out complexity, while the former tries to expose it.

The Holocaust museums in Warsaw or Berlin are an attempt to reveal the enormity of a monstrous crime, made all the more monstrous by its covert logistics. Through the museums’ explanatory and revelatory powers, we bear witness to the process of the crime, thereby snatching the victims from oblivion. There is a rebalancing of the cosmic scales of justice in such memorialization. A monument such as the Vietnam Veterans Memorial in Washington DC works on a different but related principle: an exaltation of humanity through the simple invocation of a name. And we, as witnesses to their sacrifice, restore the value of the human in the face of war’s inhumanity.

What these memorials do socially and politically is to act as markers of our moral imagination at a given time. These are the values we embrace, and there is no going back.

This is the first reason why many of the statues under fire today are problematic: because they sacralize values and individuals that are out of sync with the hard-won political and moral consensus developed by − and imperfectly reflected in − our laws and our policies. So, they become major irritants. Cecil Rhodes in Oxford is a case in point; he was a man of his time, and that time has passed.

The statuary of the southern United States is of a different order: it is the symbol of a cause that was already perceived as unjust – by the entire North of the United States, the Union – at the time. No amount of cultural justification can turn the defence of slavery − what was then euphemistically referred to in the South as ‘our peculiar institution’ − into anything other than the defence of a project already perceived as abhorrent by a majority of Lee’s fellow Americans.

For African-Americans, the continued presence of a Robert E Lee statue stands in defiance of the consensus that the system of chattel slavery was inhuman and immoral. The Lee statues, the rebel Confederate flags and the Liberty Monuments to the partisans of the White League are no more than the whispered intimidations of the vanquished whose cause was already a lost one then. This isn’t so much that the past keeps changing, but that their present had already settled the matter.

Paradoxically, it is in multicultural, liberal societies that things were bound to get most obviously complicated. As groups gather recognition and confidence, official versions of history − including local history − are challenged. And as recognition fails to translate into power, security and well-being − as is the case for many African-Americans, to pick but one example − the political charge of such symbols becomes more problematic. When this symbolism serves as the backdrop for outright intimidation − and, it would seem, intimidation with impunity − things get ugly.

The case of France stands out here. It is not lacking in assertiveness in matters of national identity but seems far more relaxed regarding the plethora of varied public monuments that are its street names that indiscriminately glorify heroes of the left and the right, revolutions and counter-revolutions, champions and villains. Perhaps a kind of ‘serial commemorating’ is the answer because it keeps the messiness of the past in full view. Though even in France, the last Marshal Pétain street was de-baptised in 2013. The hero of Verdun toppled by the shame of Vichy. 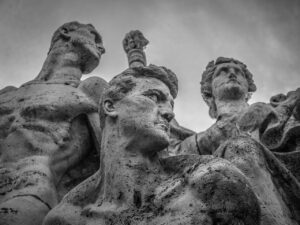