There will be no President Le Pen

My work with focus groups across France suggests something is shifting. The Front National is a threat, but the populist domino effect will stop at France 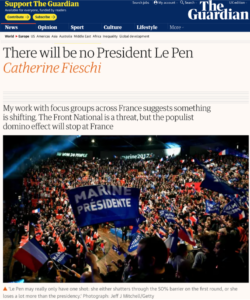 Alarming though the narrative of a populist domino effect is – delivering Brexit, Donald Trump and soon Marine Le Pen, followed perhaps by Frexit – the reality is that President Le Pen is not on the cards. That’s not to say that “Marine” (as the Front National leader now brands herself) or her voters should be lightly dismissed. But it does mean that while she has had a disproportionate effect on French politics over the past few years, she may not be the most important figure in what is now a very open race.

No doubt Fillongate – the spectacle of the former conservative prime minister and “president-in-waiting” François Fillon squirming over alleged public payments to his wife, Penelope – is playing into the hands of the far right.

And French voters have already defenestrated the other political grandees: François Hollande had wisely ruled himself out of a return to the Elysée, but his fellow heavyweights Nicolas Sarkozy, Alain Juppé and Manuel Valls were swiftly discarded in the party primaries.

This leaves Le Pen, Jean-Luc Mélenchon of the far left, and Emmanuel Macron, rising star of the third-way movement En Marche! – and there are new and far-reaching dynamics afoot that turn this into a make-or-break moment for France.

While Fillon’s troubles have given Le Pen a boost, the two candidates’ electorates are vastly different, so any advantage to her will be marginal. The key factor playing against Le Pen remains France’s two-round, first-past-the-post electoral system.At a time when other parties of the populist right seem unstoppable, Le Pen has a particularly robust set of obstacles stacked against her. And this now matters in ways that go beyond the usual lockdown by mainstream parties to block the FN come the second round (the so-called front républicain).

What matters more this time is what the FN has been promising its voters. Of course, Le Pen has benefited from the things that have buoyed up populists elsewhere in recent years: the perception of growing inequality, concerns about migration, the aftermath of the financial crisis, and the failure of centre-left parties to deliver the goods that their traditional constituencies aspire to. And, added to that list, France has suffered major terror attacks.

All this could deliver 30% of the vote for Le Pen in the first round of the contest, on 23 April. If she makes it to the second round, then what? Probably nothing, I would say. She would fail against any of the candidates she faced. And winning the first round only would hardly stem the inevitable consternation of her supporters, who expect nothing less than power.

The FN is deeply divided: many put up with Le Pen’s strategy (led by her almost universally despised adviser Florian Philippot) only on the condition that she delivers on the presidency. If she doesn’t, borderline far-right voters may not mobilise for the parliamentary elections, in June. And in that case, her own leadership position would be in jeopardy.

Le Pen, in other words, may really only have one shot: she either shatters the 50% barrier on the first round (a chance I would put at about 10%, barring a catastrophic terror attack or substantial scandal) or she loses a lot more than the presidency.

Le Pen’s second big obstacle is that she is no longer the outsider. Socialist Benoît Hamon is gathering steam while Macron, a former finance minister and the polls’ favourite, is emerging as the progressive alternative to Le Pen. They’re the “fresh faces”. If anything, Le Pen is starting to look like an old hand.

The fact that there are alternatives – even liberal ones – is a novelty in France. Of course, this is partly an optical illusion. But the FN no longer has a monopoly in the marketplace of renewal. The primaries – Républicains, but also Socialists, have mobilised supporters who, a few months ago, were in despair. And Macron’s momentum is also a symptom of the growing wish for change – across the political spectrum.

My work with focus groups across France suggests something is shifting, some of it manifesting as support for the FN but also in the green shoots of a new more positive outlook, a new decentralised, local entrepreneurialism. In no way should we underestimate the FN’s capacity to mobilise – it is a threat. But as things stand, renewal may emerge in other, more hopeful ways.

Published on 8 February 2017, The Guardian