Populists of the World Unite

Catherine Fieschi on why America’s hard-right is schmoozing Europe

Yes, Europe seems to be maintaining political unity in its support of Ukraine, and the US is lavishing eye-watering sums on it both in military and humanitarian aid. Yet one cannot help but feel that these might be short-lived spells of relief in the face of mounting storm clouds on the political horizon. Both at the domestic and international level, populist politics looks to be gathering pace still.

On the domestic front, we should be cautious in our relief. In the French elections Emmanuel Macron was indeed re-elected, and comfortably so, but there is no denying the space occupied by populist politicians on the left and the right. In the first round, Marine Le Pen
gained 23 per cent of the vote, left populist candidate Jean-Luc Mélenchon 22 per cent, and far-right candidate Éric Zemmour 7 per cent. Add to this a record low turnout, and the picture is one of a system in which mainstream politics has overall been rejected in favour of various populist options.

The Hungarians weren’t so lucky, and Viktor Orbán’s capture of the media and quashing of the opposition over his years in power delivered solid victory.

What should be cause for further concern is what is happening in the United States, as well as its potential impact on European politics. A quick flick through American politics today suggests dysfunctionalities of staggering magnitude and depth, and the full extent of the success of the right-wing Republican project, as confirmed by the intention to reverse Roe v Wade.

The words of JD Vance, the Ohio Republican senatorial candidate – author of the rather good memoir Hillbilly Elegy – pander to an ‘American heartlands’ view of the United States’ role in the world. Asked about the fate of Ukraine, Vance simply replied that he ‘didn’t really care what hap- pens to Ukraine one way or another’.

On an even more basic level, we would do well to keep in mind that there were 440 anti-voter bills in 49 states at the end of 2021 and rising, calling into question citizens’ ba- sic rights to vote. Republicans have pursued this agenda relentlessly. They have played a long game and invested in media, education and minor and not so minor projects – all of which have secured them a social and political base that is well-disposed towards the deep reversal of the American liberal global project and that of its allies across the world.

And it is perhaps on this last point that we should be most alarmed. Between May 18-20, the Conservative Political Action Party conference, an American conclave of the right, was held in Europe. Viktor Orbán gave the keynote speech, and other speakers included the Brazilian President Jair Bolsonaro’s son, Eduardo, and the president of Spain’s far-right party Vox, Santiago Abascal, as well as some well-known American Trumpian voices, including Trump himself.

Marine Le Pen, whose earlier appearance at the conference had met with rapturous applause, chose not to cosy-up too closely to Orbán in the run-up to the French parliamentary elections in June but she sent her deputy.

The export of the Fox News-driven conference from across the Atlantic is deeply worrying. Up until now populists have failed in their attempts at international alliances. At the European Union level their nationalism has always been in the way of their working together, and their groups tend to be short-lived or ineffective as a result. As for American attempts in Europe, the one led by Steve Bannon, the

former White House adviser, in 2020 that aimed to create an Academy for the Judeo-Christian West ended as a damp squib – possibly not helped by his dismissal from the White House amid charges of defrauding donors.

But something may be changing: the conference’s embrace of Orbán and an international smattering of ‘strongmen’ hailing from the hard-right, aligned with Putin and sup- ported by Trump and a media

empire, suggests that we are entering a Trumpian-infused second act that in its triumphal revanchism is seeking to create an international right-wing populist, or even authoritarian front. This is about politics, media, but also money – something Euro- pean populist parties have been short of. As Marine Le Pen explained to French voters, her party is so poor it had to borrow money from a Russian bank.

As some have pointed out, the Russian aggression against Ukraine has complicated matters when it comes to Russian funding of disinformation to the West. Many routes have been shut down. But a new route be- tween the US and Hungary as a platform to flood Europe with dirty money is a good replacement to the old Russian route. 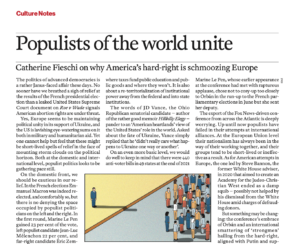