Framing our COP26 research for the context of 2022

When we finished this project the world was busy coming to terms with the severity of the climate crisis, and tackling a global pandemic recovery.  We publish our results  in a dramatically changed context that highlights the relevance, difficulty and urgency of our conclusions. Against the background of an accelerating climate crisis, the Russian invasion of Ukraine has added layers of complexity and urgency.

Most immediately, and in light of the necessary sanctions imposed by the EU and Western allies on Russia (and beyond the human hardship inflicted by war), what has been highlighted is Europe’s unsustainable dependency on Russian gas and oil.  The war has also affected grain supplies and is contributing to a food crisis that is gathering space and set to hit a number of countries dramatically (including Egypt where COP27 will be held later this year).

The concatenation of dramatic policy shifts and the deep transformation of the European security order are the context within which the issues of climate justice, the need for an accelerated transition to renewables and the imperative of a just transition are being discussed and implemented.  To sum up, the difficult trade-off between equitable policy measures and the needs of the planet has been compounded by the imperative of energy security. We now have three irreconcilable imperatives instead of two: to protect the planet, to protect UE energy supplies in a situation of conflict, and to protect EU citizens and their well-being as they transition to different sources of energy.

The pressures on the various actors we mapped in our research will increase, voices may get more strident, policy-makers may have to be more decisive, citizens’ tolerance for the costs of solidarity with Ukraine may well begin to wear thin as winter approaches and the situation becomes more dramatic in the everyday lives of Europeans, but also in terms of climate linked catastrophes.  We are in a  situation in which the role of actors old and new will be both even more crucial, but potentially even more fragmented and/or unpredictable.

Looking back to the summer of 2021 as wildfires raged across Southern Europe, Australia and the Western United States, and as Germany woke up to the devastation wreaked upon it by historically severe flooding, we were struck that the IPCC’s report – and its dire warnings – streaked across global headlines – and then sank away again, far from the gaze of public opinion.  As for COP26, the planet’s most important climate gathering –  which was to be held in Glasgow later that year in November – it seemed to barely figure on people’s radars.

The disconnection between the tangible climate emergency all around us, and the relative silence concerning the event where the world’s leaders would be measuring their scant progress on the Paris agreements, was striking.

This is when Counterpoint and E3G decided to investigate this disconnection: Were people really not talking about climate or COP26? After all, conversations during the pandemic seemed to suggest a new commitment toward ‘building back better’ – and an awareness of the interdependence and fragility of the balances, including the environmental balance, we had taken for granted for so long. If anyone was involved in climate policy discussions, who were they? How powerful were detractor voices? And what kinds of actors would we see emerge on both sides as COP26 drew closer and as the conversation picked up.

Our aim was to try and map these conversations, and we were mostly interested in the kind of unguarded, less obviously curated ones that tend to take place on social media.  We had conducted this kind of research – a listening exercise – around the theme of the European Green Deal.  We were keen to repeat the experience around the events and the theme of COP26.   This report is the result of this research and the analysis we then jointly undertook with E3G.

This was not a straightforward project – neither technically, nor in terms of how we would discuss results that were revealing of dynamics that wouldn’t necessarily benefit from attracting attention.  Whatever else these conversations were and are, they are highly political, and some are highly strategic.  Offering a sweeping view of the strength and weaknesses of such strategies, does not benefit all actors equally.  So we devoted some time, post-research, to some IRL conversations that would steer us toward the best, most authentic and most useful way of presenting our results.

What you will read here is the results of our research and analysis framed by some careful deliberation. We trust you, the readers, to draw your own conclusions in light of Europe’s changed political and security landscape. 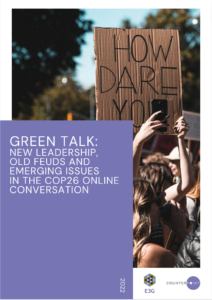 In partnership with
E3G