The roots of populism’s success in Norway

How can it be that Norway, a prosperous, successful country, has so easily allowed populism to penetrate its establishment?

In this thought-provoking essay, Financial Times journalist Martin Sandbu challenges the traditional picture of Norway as a consensual social democracy and explores the various elements of Norwegian culture that have over time fostered a deep-rooted conspiratorial populism. Sandbu aims to explain the source of a phenomenon that manifested itself most violently in terrorist Anders Breivik’s attacks in Oslo and Utøya in the summer of 2011. Along the way he reflects on the Norwegian ‘A4’ life, the Jante Law, the Eurabia conspiracy theory and the rise of the populist Progress Party.

He concludes by asking whether it is Norway’s mindset of ‘mediocrity’ that has laid the foundations for populist mobilisation.This is not just a must-read for anyone with an interest in Norway’s particular cultural make-up; Sandbu’s analysis also contains vital insights into the roots and prospects of populism across the whole of Europe. 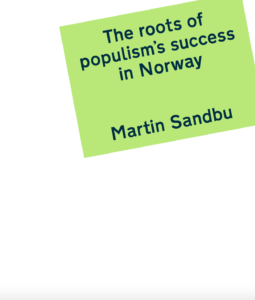 From the project
Rival Political Narratives