Did Italy invent modern-day populism, alongside fascism? In 1946 the young Republic saw Guglielmo Giannini’s Fronte dell’Uomo Qualunque, the Common Guy Front, challenge the established parties and yet again, in 2013, Beppe Grillo’s Movimento 5 Stelle will be raising the populist flag. Both Giannini and Grillo took their first steps in the show business, learning to please and tease audiences – technique also boldly used by Silvio Berlusconi in his triumphal political début in 1994, in which he swept both the national and European elections. Philosophers and politicians, from Umberto Eco to Vittorio Foa, have argued that a populist strain may be ensconced deeply inside the Italian political DNA. Is this the case? Is the country doomed to favour bizarre and feisty leaders incapable of running a serious program of economic and social reforms? If Peron is the model to follow, why favour, in times of crisis, austere, cerebral, even aloof prime ministers ranging from De Gasperi, to Aldo Moro and Mario Monti?

The Italian populist paradox, constructed from the ashes of the Neapolitan Republic, 1799, is alive and kicking in the digital era of social media and blogs. So far it has not careened to the vicious, racist fringe – but rising unemployment, rampant corruption and bleak living conditions are dangerous factors. Taming Italian populism and steering the country back towards economic growth will be the formidable task of new generations of leaders,  forged in the coming political elections 2013. 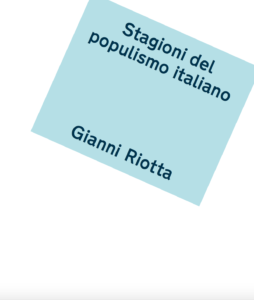 This essay is in Italian. Its English version is included in the volume Populist Fantasies: European revolts in context.