The Front National – a party caught between extremism, populism and democracy

In Le Front national, entre extrémisme, populisme et démocratie, Michel Wieviorka argues that an effective opposition to the party must be based on up-to-date knowledge, rather than on good intentions. He discusses the suitability of the different labels attached to the Front National over time  – including extremist, populist and nationalist – and investigates the new geographies of FN support. A support that is no longer concentrated in ‘difficult’ cities or areas but comes from ‘peri-urban’ regions. The key question, Wieviorka asks, is whether this trend is likely to be reinforced in the near future. 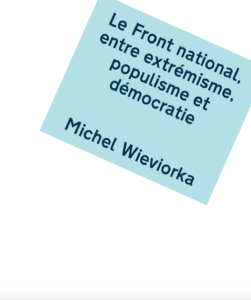 This essay is in French. Its English version is included in the volume Populist Fantasies: European revolts in context.