In this revelatory piece – part of the ‘Reluctant Radicals’ series – Göran Rosenberg explores the hitherto limited success of populist movements in Sweden. This has been partly due to the historically remarkable success of the Swedish model and the concept of folkhemmet, the People’s Home, defining a tight-knit national community striving for a class-transcending social order based on peace, justice, progress and democracy. For several decades the model offered generous access to welfare for all and far-reaching collective undertakings for wages, pensions and equality. In the early 1990s the Swedish paradise began to crumble. Collective obligations were weakened. New restrictions on pensions, health care, benefits, sick leave and unemployment insurance gave rise to increasing socio-economic inequalities. The rapid transformation from a culturally homogeneous nation to a society characterized by cultural and ethnic pluralism challenged the bonds of national cohesion.

Thus, while a particular Swedish way of life, deeply rooted in myths, narratives and memories, is vanishing into the past, the nostalgia for a ‘paradise lost’ remains a powerful theme in Swedish politics. As long as this promise of a return to a golden past is seen as a legitimate and credible posture within mainstream politics, the politics of nostalgia will resist becoming the domain of political radicalism. As Sweden still remains a reluctant nation, the Swedes still remain a reluctant people. 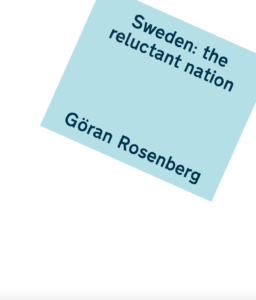